Strategos: Rise of the Golden Heart - The Prologue 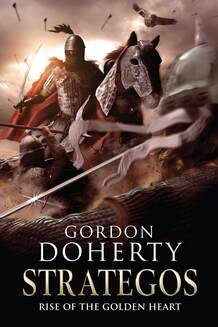 A zephyr lifts me ever higher and the spring sun beats upon my outstretched wings as I soar across the rugged, golden heartlands of Anatolia. The first navigators to set foot on this realm named it the Land of Sunrise. Yet had they only known what torment was to be played out in the ages ahead, they may have chosen a more suitable moniker.
These last years have been more brutal than many past. Driven by the death of his uncle Tugrul, Sultan Alp Arslan and his Seljuk hordes have torn these lands asunder, smashing against the dying embers of Byzantine resistance with the tenacity of a beating black heart. The boots and hooves of his armies and the broad wheels of his war machines have ploughed the earth year upon year, sowing the corpses of Byzantine farmer-soldiers in their wake.
Of the few Byzantine souls who refuse to crumble under this pressure, one troubles me greatly. Once I thought he was the man capable of defying my greatest adversary, Fate. Now I see in him more darkness than light. The boy once known to me as Apion has become an embittered husk of a man, a strategos who leads his beleaguered border army into battle as though he relishes the prospect of death. In victory, he sees only the failures of his past, while his men chant the name that has come to define him.
The Haga!
Twelve long and bloody years have passed since I last spoke with him, but I know that I must visit him once again. For I see a tumult of portents as to what Fate might throw in his path. I see bitter conflict, bloodshed, betrayal, loss and pain . . .
But, most vitally, I see hope.
Yet before I go to Apion, there is another to whom I must speak. One who has lost himself in hatred. He has pursued Apion like a vulture for so long that I fear he has forgotten those lost years when they were once like brothers.
Bey Nasir scoured the noon heat haze, his grey eyes framed by the studded rim and noseguard of his helm. The jagged, sun-bleached valleys of Charsianon seemed to be devoid of life. Still, he thought as he eyed the bend in the valley ahead, they were in enemy territory and there was much potential for ambush.

He twisted in the saddle of his chestnut mare to glance over his Seljuk warband. Two thousand men marched with him. Seven hundred were ghazi riders. These nimble steppe horsemen were armoured in light quilted vests and armed with composite bows, scimitars, war hammers and lassos. Bolstering the ghazis were one hundred Syrian camel archers, swift and hardy. They rode at a good thirty paces behind the ghazis though, as the ghazi mounts were notoriously skittish around camels. To the rear marched the infantry; over one thousand akhi spearmen, wearing iron mail vests or padded jackets, iron conical helms and carrying circular shields painted in turquoise, green and tan. In their midst marched one hundred of the finest engineers from the heart of Persia along with the wagons that carried their siege implements and the warband’s supplies.

No, he assured himself, squaring his broad shoulders, his scale vest glinting in the sun, the Byzantine forces are weak and scattered. No ambush can trouble my forces today.

But almost as soon as the thought started to calm him, one of the nearest ghazi riders called out, pointing to the western end of the valley. ‘Sir!’

Nasir spun to face front once more. His gaze locked onto the dust plume approaching. In the heat haze, he could see only a blotch of darkness at its source.

‘Halt!’ he barked, raising one hand and tugging on the reins of his mount. Behind him, the warband rippled to a standstill, the drumming of hooves and boots died and was replaced by a rattle of spears being levelled.

Nasir’s brow dipped as he watched the approaching shape. A bead of sweat danced down his cinnamon skin. For just a heartbeat, he imagined the two-blooded cur who had plagued his life for so many years now; the black-plumed helm, the crimson cloak, the ivory-hilted scimitar. The whoreson who had led the Byzantine resistance for so long. Too long. His lips curled into a grimace and he raised a hand, readying to wave his riders forward.

Then, from the heat haze emerged a rider in a light linen robe, saddled on a piebald steppe pony. It was merely the scout rider he had sent out earlier. A chorus of relieved muttering rang out from the column and Nasir’s heart slowed, his hand dropping and his grimace melting.

The young scout slid from the saddle, his robe drenched with sweat, panting as he crouched on one knee before Nasir. ‘Bey Nasir, by noon we will be in sight of the town of Kryapege. From the end of the valley I saw the farmers retreating behind its gates and the defenders bolstering the battlements.’

Nasir’s eyes narrowed. ‘So the Byzantines will not face us in the field? Instead they choose to cower inside their decrepit walls?’

The rider nodded with zeal. ‘It seems they fear even the news of your approach!’

Hubris laced Nasir’s blood and he waved the warband forward once more. He would strangle the life from the place, then destroy the dog who had cursed his being. Memories of his childhood flitted through his mind and his knuckles trembled white on his reins. He saw all that he had lost since then. All that he had lost because of that bastard. He saw her face.

Then as they rounded a bend in the valley, he slowed, his blood cooling.

‘Bey Nasir?’ the rider nearest him asked nervously as the men slowed behind him.

Nasir’s eyes hung on an ancient Hittite carving etched into the rock, high up on the valley side. A two-headed eagle, its wings vast, clutching a bull in its dagger-sharp talons.

At this, the grimace returned and his heart thundered once more. He grappled his scimitar hilt and slid it clear of his scabbard, holding the blade aloft in a clenched and shaking fist. Then he kicked his mare round to face his warband.

‘On the plain ahead we will hew timber for our siege engines and we will sharpen our blades. Then we will strike Kryapege from history!’ He boomed, then punched his free hand against his chest. ‘Allahu Akbar!’

‘Alla-hu Ak-bar!’
Hope you enjoyed the intro! You can pick up a copy of Strategos: Rise of the Golden Heart from all good online stores.