They call her misthios – mercenary – and she will take what she is owed...

Kassandra was raised by her parents to be fierce and uncaring, the ideal Spartan child, destined for greatness. But when a terrible tragedy leaves her stranded on the isle of Kephallonia, near Greece, she decides to find work as a mercenary, away from the constraints of Sparta.
Many years later, Kassandra is plagued by debt and living under the shadow of a tyrant when a mysterious stranger offers her a deal: assassinate the Wolf, a renowned Spartan general, and he will wipe her debt clean. The offer is simple, but the task is not, as she will need to infiltrate the war between Athens and Sparta to succeed.
Kassandra’s odyssey takes her behind enemy lines and among uncertain allies. A web of conspiracy threatens her life, and she must cut down the enemies that surround her to get to the truth. Luckily, a Spartan’s blade is always sharp. 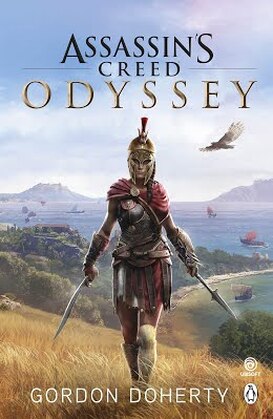 Buy now!
THE OFFICIAL NOVELIZATION BASED ON THE POPULAR VIDEO GAME FRANCHISE.
​The Assassin's Creed novels have sold more than 1 million copies around the world, gaining almost 30,000 4 and 5 star reviews.
Assassin's Creed Odyssey was published by Penguin in 2018 and translated into many foreign language editions.