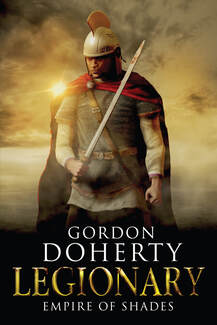 Rivulets of blood stole down Ambassador Vitalis’ face as winter-bare branches clawed across his bald head. But on he sped through the dense woods, fuelled by terror, his sandals skidding across the icy ground, the loose folds of his white pallium robe snagging and ripping as he went. Two sounds echoed in his head: a youthful memory of his tutor’s voice, telling him of the Huns, of what they did to men of the empire... and the all too real din of pursuing hooves – growing louder, closer.
Lungs on fire, blood hammering in his ears, he dared not slow to glance back. The spry, caped and armed explorator running with him – the last of his escort – did, and took a bone-tipped arrow through the eye for his troubles. The imperial scout’s body pirouetted into a dive in a limp imitation of life, blood spraying Vitalis like hot rain as he fell. A throaty, foreign ‘Whoop!’ from behind lauded this kill, then the hooves of the dark horsemen rose into a deafening and rapid thunder, closer than ever. Vitalis surged onwards with every speck of strength left in him, blinded by panic, ankles buckling and twisting, one sandal snapping free, thorns ripping away strips of his robe. When he tried to plunge through a mesh of gorse bushes and low-hanging branches, his entire body jolted to a halt – shackled by the roots and branches like a fly in a web. He wrenched and kicked to work himself free but to no avail. Heart climbing into his throat, he heard an animal wail pour from his lips, seeing in his mind’s eye the vicious blades and neck-wrenching lassos that they would use to slaughter him.
And then there was… silence.
Panting, he dared edge his head round to look behind him. The Hun party had halted a short way back. Due to their distance and the failing light, he could discern little of them. But he could hear their strange, jagged words. Hushed. Clipped. Edged with… fear? They each gazed past Vitalis, beholding the path lying ahead of him as if it was a realm of spirits. With a short, snapping order from the lead rider, they wheeled away and were gone.
Vitalis gawped at their retreat until there were just falling crystals of disturbed frost where the Huns had been. He worked one arm free from the mesh of entangling undergrowth, then with a violently shaking hand, fumbled his Christian Chi-Rho brooch to his mouth to kiss it, whispering words of prayer through trembling lips. Gradually, he picked himself clear of the rest of the tangled branches. Alone, he beheld the wooded trail ahead and crept forward, the very sound of his own rapid breaths haunting him.
Eventually the trees thinned and he waded through a glade of ferns. A high, white bluff rose beyond, bright against the dire grey sky. Agog, he staggered towards it. ‘It cannot be – I have arrived?’ he warbled to himself, seeing a glow of orange atop the bluff.
Doubts told him he was mistaken, that this was the wrong place. But the words of General Theodosius had been clear as springwater:
The Goths of Arimer have no quarrel with the empire. They wish to be trained as legions to fight against Fritigern’s horde… with them we can end the war and reclaim Thracia. They are trapped north of the Danubius, taking refuge on a stony height above the woods. Go to Arimer, bring him and his warriors back with you.
A new fear crept up on Vitalis then: what lay on top of the bluff? What if the Huns had taken it from the tribesmen he sought? He clenched his Chi-Rho again and thought of the land whose fate rested on his efforts here. The green-gold hills and pastures south of the river. Thracia, sweet Thracia, he mouthed, seeing his homeland as it had once been and as it was now: harrowed by the boots and hooves of Iudex Fritigern’s rampaging Gothic horde, sown with the bones of the legions broken outside Adrianople in the summer.
‘For Thracia,’ he whispered firmly. His convictions strengthened, Vitalis puffed out his chest and took a step towards the high bluff.
As he did so, the myriad shadows crouched behind him in the ferns rose: tall Goths, faces streaked in red paint. ‘Vesiii…’ they whispered as one, then converged on Vitalis’ unsuspecting back like claws…